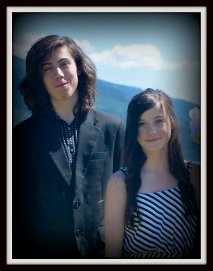 Carter and Kennedy Allen are two gifted musicians who have recorded a song together that is sure to make an impression. Spider is the 7th track on Carter’s album, Useless Motherf***er. It’s a terrible name, but hey, the kid is seventeen and promotion is not his main focus, he’s in it for the thrill of the music, not the fame.

Carter started the project and then brought in his younger sister, Kennedy, in to sing two of the songs, The Raven and Spider. The choice to bring others in and then sing their praises instead of his own, is what sets this young man apart. That, and his talent.

Carter is a self taught musician who is passionate about music, composing, and performing. At the age of 15, he wanted to record a song with professional results, so he struck out on his own to find out what needed to be done to make his goal a reality.

He made connections in the local music scene, formed friendships, and saved money working as a line cook at a local restaurant. The perk of learning how to cook and a future trade ticket, doesn’t hurt his future. The project taught him how to complete his goal without parental support or help, because his parents couldn’t afford lessons, recording time, and had no knowledge of the industry.

Those who heard his song, Curtains, were amazed that a fifteen year old boy  had composed it, played all the instrumentals, sang the lyrics, and paid the bill with no help from his parents.

One talented film industry professional heard the song and attached it to her short film called Monster, which was showcased at the Cannes Film Festival. Not bad for his first attempt with no formal training.

The kid has talent.

Then he shared the credit with others. He brought in friends to sing and his little sister, whom he is extremely proud of. He then formed a performing band called Free Breakfast and gave the credit of the performance to them and those who were guest vocalists. His name does not appear on the album credits or information.

He plays for the music and not for a future career, though I am sure he has one. Carter Allen has talent, ambition, and drive. Where it will take him once he’s learned self promotion, is yet to be seen.

Who do you know?

Do you know a teenager who has done something extraordinary? Share their story in the comments below or send me an email with details so I can showcase their talents on this blog.

Shannon Peel is the author of THIRTEEN a book about a boy and his mom caught behind enemy lines when soldiers attack their North American hometown. The story asks the question, what if it happened here?